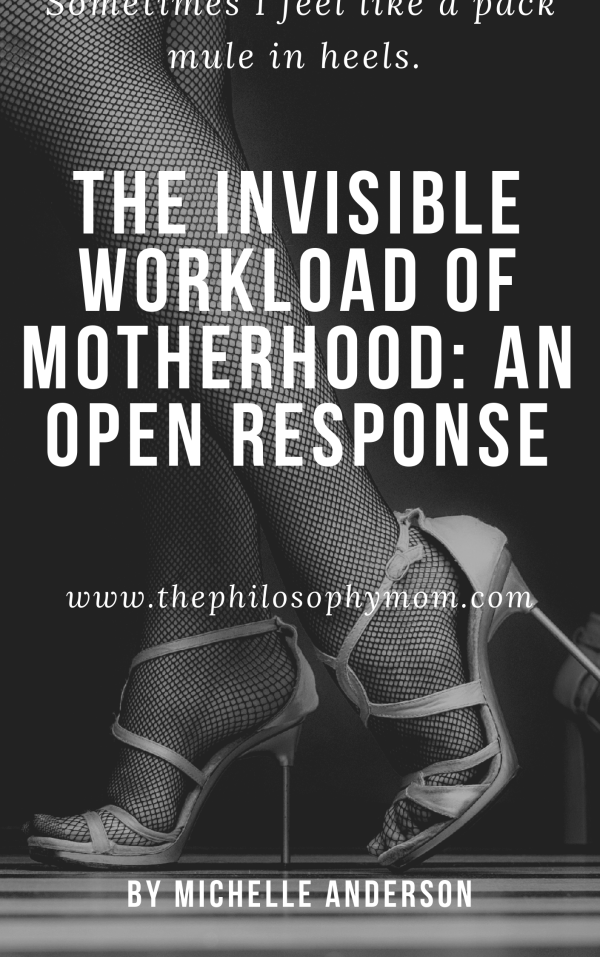 Philosophy: I do it for them; even when my nerves are shot and my mind feels like the junk drawer I don’t have the wherewithal to clean, even when I feel like nothing more than a pack mule in heels.

I’m sitting at my desk, screaming baby on my lap, dog barking at someone jogging, dishwasher running (it won’t be emptied until it needs refilled) and all I can think about is missing my daughter’s soccer game today.

I missed it on purpose. I missed it because I’ve run myself ragged since Wednesday, stopping only to sleep, and I needed a day with as little to do outside of home as possible. Sure, her dad was there. But I missed it for selfish reasons. I know I don’t get this time back.

I’ve been reading a lot about the invisible workload of motherhood in the blogging world lately. It’s true. Us moms do everything for everyone but ourselves and rarely get noticed. But I disagree that it’s killing me. It’s the reason I live.

My day goes like this when I have the kids: Get up, brush my teeth, take the dog out, feed the baby, change and dress him, nag Elise and Jack to get dressed, shower while singing to the baby to try to get him to stop crying, nag Jack one more time to get dressed, hair, makeup, breakfast (for them not me), medications, lock the dog up, pack the bookbags, head out the door, work 8 hours where I could be in any one of two locations in any one of three Courts doing any one of 6 jobs, pick up the kids, nag them about homework (at least 5 times), take the dog out, change, unpack backpacks, sign papers for school, force them to sit down and DO HOMEWORK, pack lunches, get Elise ready for soccer, pack the car, pack the baby, sit at practice for an hour and a half, come home, throw laundry in, help with baths, eat somewhat of a dinner, collapse into bed, get up because I forgot to feed the dog, and finally, lay down for good.

That’s just the standard format. That doesn’t include doctor’s appointments, birthday parties, sorting bills, the constant texting to arrange and rearrange schedules when their dad is out of town. That doesn’t include folding the laundry, cleaning up dog puke, shoe-tying lessons, or gagging as I pour out spoiled milk when I finally get to the store to replace it.

Is it by choice or by chance that I’ve taken on this workload? Both. I chose my children. I still choose them, every time. But chance led me to do this all alone… in a way.

It doubled the work and halved the partnership. I cut my own grass. I take my own trash can down and bring it back (man, I miss having someone else to do that chore). When it comes to choice, in that regard, I don’t have one.

Some mornings, I’m sweating so much by the time I actually get to work, I could use a shower again. Some mornings, I feel like I’ve already fought a war, especially when one of the three just will not cooperate. Some days, work is a break for me. Some nights when I pick them up, I resent the fact that I don’t get paid for this second job I do and I don’t have time to get a second job that pays me because of it.

I can tell you this much, though, I’m not angry that no one notices. There’s not really anyone here to notice besides the kids and I don’t expect them to understand the amount of work that goes into running a household. The no one I’m talking about is a husband.

I used to be the mom that did all these things, ran the ship, battened the hatches, surfed Pinterest for cute holiday snack that never turned out, all while trying To be a good wife. Let me say, I was much unhappier then. I was unhappier because there was also another adult I was caring for who also didn’t bother to notice this “invisible workload”. He made sure his workload was very visible and very noticed, but mine was just…expected.

That’s why I don’t mind doing these things and doing them alone. I did them anyway and did them alone even with a partner. That’s the worst; feeling alone when someone is right next to you.

So, I think all us single moms are the lucky ones. Sure, we don’t get noticed and rarely appreciated, but that’s understandable and expected. It’s not like they sit in pre-k circle time meditating on how grateful they for the PB&J you slapped together that morning.

At least our invisible workload isn’t unnoticed by the ones that are supposed to be sharing it but aren’t. This work that I do is to keep three tiny humans that depend on me alive and well; it’s not for fame, glory or praise. It means I’m making a place in the world for them and they’re watching me do it.

In other words…I’ll carry the weight of it. In heels if I must. I might complain about it sometimes, but in the end, I do it all for them. We all do.